Interview with Drastic and Jay S

Sometimes in this business you have to take matters in your own hands. That’s what the hip hop duo Drastic and Jay-S have accomplished. The Queens/Long Island group has surfaced Primary as their record label and pushing quality material to the hip hop masses. With two impressive singles I’m Jus Saying and Gone under their belt, they have the musical tenacity to make creative music. With sharp lyrical delivery and dope production, Drastic and Jay S are taking control of their music. The duo speaks on their forthcoming opus More Than Music, how they got into hip hop and future projects.

Ty DJC Jones (Intrigued): What’s going on fellas, tell us about your musical background. How did you guys meet up and what made your guys decide to take music seriously to the next level?
Drastic: What's up. I've been around music my whole life. My mom would always have music playing. I also did a little drumming when I was younger. I decided to take music seriously when making songs started to come natural to me.

Jay S: For me, listening to rap was always a mission. I had to sneak around just to listen to rap. My dad was always playing Tupac as I was growing up, but he had a stash of music hidden. I guess he didn't want me to be "misguided". We met through one of Drastic's cousins named AceO who also raps and is a part of this movement. I decided to take music seriously when drastic did. It motivated me to know I wasn't alone on this.

Ty DJC Jones (Intrigued): What do you guys bring to the table in this fickle hip hop industry?
Drastic: We're making music from the heart.

Jay S: Yea basically and staying true to ourselves.

Ty DJC Jones (Intrigued): Who are your biggest influences that made you guys want to get into the game?
Drastic: For me, it had to be 50 Cent and his whole movement and Dipset.

Jay S: What influenced me was going to my first rap concert to see Eminem and Jay-Z share the stage. Watching the crowd’s reaction made me want to be able to one day I have that same effect on people.

Ty DJC Jones (Intrigued): Jay-S, you also an audio engineer. Did you had bad experiences with previous engineers trying to match your lyrics or was audio engineering always something you wanted to get into?
Jay S: Audio Engineering has always been something I admired. In the past I've dealt with engineers and I've felt like I had no control over my music.

Ty DJC Jones (Intrigued): Drastic, you admire the accomplishments of LL Cool J. How his successes shape your work ethic in the industry?
Drastic: I would like to one day achieve some of the same accomplishments as him. I feel like we both have a lot in common. Seeing where he is at now makes me work that much harder.

Ty DJC Jones (Intrigued): Your mixtape “More Than Music” is dropping in March. The title has a lot of meanings to it. What is your meaning of the title and what was your motivation behind the mixtape?
Drastic: It's more than music. Its real life experiences! It's music from the heart that people can relate to. It's not just music; it's more than that for us.

Ty DJC Jones (Intrigued): Who’s on the mixtape as far as production and guest appearances?
Jay-S: It's just Drastic and I. As far as production, the entire mixtape was produced by our producer Josh Lamont of Theme Music Productions.

Ty DJC Jones (Intrigued): Do you think the fans will be receptive to “More Than Music”?
Drastic: Why not? It's good music. There's at least one song that someone can relate to on here.

Ty DJC Jones (Intrigued): I heard some of the tracks on “More Than Music” and I’m not giving the secrets away except the mixtape is official. It’s a great project, definitely great musical energy behind it. Explain the working chemistry between Drastic and Jay-S as far as beat selection and writing process.
Jay S: Thank you. We appreciate that. We've been collaborating for a long time, so we know each other pretty well. I would say 95% of the time he chooses a beat or I choose a beat that we both like.

Drastic: Thanks, when we write a song, we start with the hook. If the melody for the hook doesn't come to us within the first 10 minutes we usually move on to the next beat. After we have the melody, we work on the concept of the song and build on the hook from there. The verses are the easiest.

Ty DJC Jones (Intrigued): Hip hop duos bring a spark to a track that’s different from solo artists and groups. What separates Drastic and Jay-S from other hip hop duos?
Jay S: The chemistry we share.

Drastic: Yea, we have a lot of things in common and we're competitive. At the same time we're not afraid to criticize each other. That’s why we continue to grow with every new song we make. All this translates through our music as a Duo.

Ty DJC Jones (Intrigued): “The “Devil is a Lie” concept was original although it was a Rick Ross joint. How did the two of you come up with the concept and construct it your way?
Jay S: We kept most of the original hook the same; it gave us room to shout out where we're from, Long Island.

Drastic: A lot of people hear Long Island and think rich white kids, but there's a lot places with neighborhoods just as bad as any of the 5 boroughs. There's a lot of talent here too and we felt like we had to let it be known on this track.

Ty DJC Jones (Intrigued): I like the statement: Everyone can rap but not everyone can make good music. Can you explain to the fans the difference between the two and how does writing a song come into play?
Jay S: In this era so many people are rapping because it doesn't require as much money to record a track on your own computer. Today, everyone knows someone that raps. With that said I feel like everyone can rap, but make good music. That's where the challenge arises. A good song isn't just a good beat with someone rapping over it. The song needs to stand apart from everything else. Creative concepts, dope hooks, different melodies, and a great production. That's what I think produces great music.

Ty DJC Jones (Intrigued): What other artists have you shared the stage with and how did the crowd react when they see Drastic and Jay-S on stage?
Drastic: We've shared the stage with other Long Island artists as well as artist from around NYC. The crowd was very receptive. They showed us love.

Ty DJC Jones (Intrigued): You guys got a label PMG (Primary Music Group). Talk to us about the label.
Jay S: The label is really called Primary, because there are four of us who rap collectively. Drastic and I decided to work together as a duo and to separate ourselves from the main label we came up with Primary Music Group.

Ty DJC Jones (Intrigued): What are your thoughts of the hip hop industry nowadays?
Drastic: It's good and bad. It's good because we feel there are more opportunities available. With so many styles you hear in hip hop/rap out there, it doesn't matter what you sound like as long as it's catchy. The bad thing about it is, that people with actual talent and great music remain underground waiting to be heard by the right person. It's like if you don't create a buzz for yourself, it makes it that much harder to get in the industry

Ty DJC Jones (Intrigued): Are there any solo joints in the horizon?
Jay S: Possibly, at the end of the day it'll never truly be solo because we help each other out when we make music.

Drastic: But it's definitely possible

Ty DJC Jones (Intrigued): What’s next for you guys for 2014? Any new projects that we need to look out for?
Jay S: A lot of work. A lot more projects. Possible solo projects and another project by us.

Drastic: Building a bigger fan base and generating more buzz with all the music we continue to make.
Go peep the album "More Than Music" from Drastic and Jay S on Itunes! 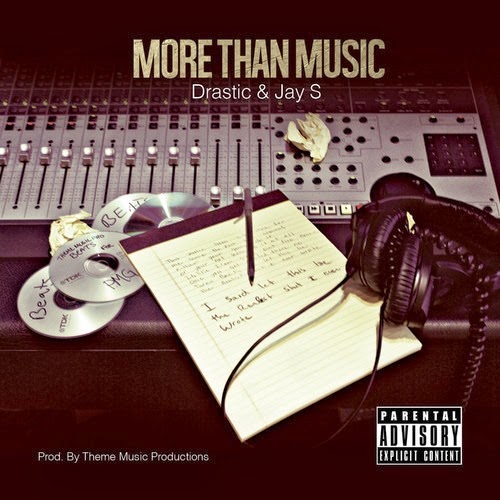 Posted by Intrigued Music Blog at 5:37 AM