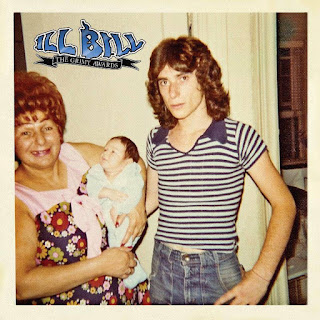 Brooklyn’s Ill Bill has paid his dues in the game dropping classics after classics with La Coka Nostra and Non Phixion. His first two solo albums have kept his name relevant to the hip hop world. After the four year hiatus, Ill Bill has returned with his third opus “The Grimy Awards.”
The album cohesiveness is right up Ill Bill’s alley from his lyrical dexterity. In addition, he knows how to select beats that fit his rhyming style. The album starts off with a nicely smooth beat with the cuts and scratches on the self-produced “What does it all mean”. As the album flows along, this is where Ill Bill flexes his lyrical muscles. Tracks like “Acid Reflux”, the piano beat laced by Beatnuts Psycho Les on “How to Survive the Apocalypse” to Pete Rock’s assisted “Truth”, are examples in which there is no question that Ill Bill can hold the microphone on his own.
The guest appearances added spark towards the album. The hyperactive riot track “Vio-lence” featuring Lil Fame and Shabazz the Disciple brings the ruckus while the DJ Muggs assisted “Power” brings out the best out of the Ill Bill, O.C. and Cormega. Ill Bill commentates about his life in the streets on the Large Pro track “Carnarsie High” asking “are we learning how to live or how to die while Premo ends the album well with “World Premier” where he pays homage and reminisces about the 90’s rappers in the golden hip hop era.
This is a well packaged album in which Ill Bill brings the old 90’s feel back with sampled beats, scratches and phenomenal guest appearances. The rugged lyrical best fits Ill Bill according to beat production. When you have an album with the likes of Pete Rock, Large Pro and DJ Premier to name a few handling the production, of course it’s a win-win situation. However, this album only goes to the golden era hip hop fans that miss the true essence of the art form while many fans will feel lost. It’s frustrating when a completed album like this doesn’t satisfy everyone’s taste; it isn’t for everybody. Then again, Ill Bill doesn’t mind as long as he makes quality music that transcends to generations, not a quick fix track that lasts a couple of months.
Strong Tracks: “Acid Reflux”, “Power”, “Carnarsie High”, “World Premier”
Weak Tracks:  None
Rating:out of 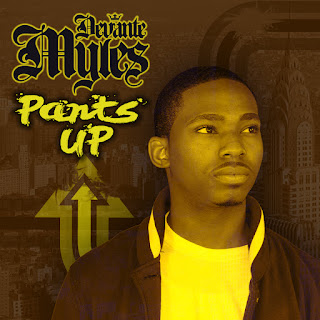 
Straight outta Brooklyn is 16 year old Devante Myles who is coming up from a strong musical background. With a versatile delivery and style, Devante Myles is ready to put BK on the map with his new mixtape “Pants Up” intrigued interviews Devante Myles as he discusses about the mixtape and his future plans.

1)            Joining me and Intrigued is Devante Myles straight outta Brooklyn what’s going my dude. You got the new mixtape “Pants Up” out. What can fans expect from the mixtape?
You can expect a lot of mc’ing. “Pants up” was my first mix tape, but my main goal was to set the bar on what I do and don’t stand for. You can definitely expect eclectic production. The mix tape was like an exercise for my artistry. Expect to bop your head (LOL)… it’s hard to find real music and that’s what my main focus was.

2)            Who do we have on the album? Who are the guest appearances and producers we got on the album?
We have a couple of features on the joint. I worked with two singers. One called Bebe Diop, she has a very distinct voice and it’s so dope on the tracks we’ve worked on. Another singer, his name is Safo… GREAT vocalist. Really appreciate him featuring on love long. We also have the Aim for a Millie joint which was with Ludovic Calixte, he also C0- Produced the track which was dope as well. Zero Production did all other production. Special shouts to Bo Dun, He was one of the radio personnel’s on the skits.

3)            You grew up in a musical family. Who are your musical influences coming into the game?
Yeah, pretty simple. My Dad and Uncle are dope producers so I’ll always look up to them. They also influenced my taste and fed me knowledge I definitely have a place in my artistry for Big and Tupac. Big for his lyrical genius and Pac because of his work ethic and I think he helped Hip Hop find new meaning to a song and music in general.

4)            Brooklyn has a diversified set of rappers from Biggie, Jay-Z, Boot Camp Click, to Fabolous and Red Café. Where do you see yourself as an artist in regards to putting Brooklyn on the map?
I think I’m the soft-spoken part of Brooklyn. When I say that, I mean I’ll shed light BK differently. I’ve never been subject to certain things because of how I was raised. This shaped who I am as a person. We all have different views but I’m so Brooklyn… I just want you all to see it from my point of view. I mean that one reason for the song “Things Done Changed “

5)            You’re sixteen and you just started in the game. How would you get your music into hip hop listeners outside of New York City?
Well honestly I try to use social media sites to expand my listeners. The rest of the marketing is left to my team, and they haven’t failed me yet!

6)            By listening to the album, I can sense that you’re a versatile rapper. Can you see yourself rhyming over anything else besides hip hop beats?
Defiantly ANYTHING! I’m so open to not only trying new music but learning its culture it’s growing. I especially want to get into a Jazz setting as well as different kinds of Popular Music. That would be dope.

7)            Describe your rhyming style when you’re putting out a song!
That depends on the song genre. Sometimes I take a smooth approach to let the listeners relax and vibe to the lyrics… and some times I just go off! Give them bars other times I’ll take direction from the producer after all our goal is to make a dope song

8)            Each song on your mixtape had no curses or degrading women in any way; it was an album in which any person can listen to. What made you go that route and were you trying to make an impact on the audience?
I went that route because I wanted to show people that curses aren’t the only way to get gritty on a track and I also wanted to make it ear friendly. I wasn’t trying to be that ignorant rapper guy that uses profanity…Plus I want everyone to be able to hear me.  I just wanted people to listen without reason not to. It’s also not who I am… Everyone may curse but that’s not something I’ll promote.

9)            Talk to us about Dam Datz Hot Music!
Datz Hot Music is my label. I own a large portion of it. So gratefully and gladly I have A say so in what happens with my career as well as my partners.

10)         Who do you listen to nowadays in music whether it’s hip hop, R&B, or any type of music?
I like Chris Brown, Kendrick Lamar, Emilio Rojas, Slaughterhouse, Eminem, Drake, Nas, Joey Badass etc. Yo that new Wu Block Album is tuff.  I’ve also been touching up on some old school like: Naughty by Nature, Tribe Called Quest, Pharcyde, Souls of Mischief and so much more. I may not stop (LOL).

11)         The music business is very hectic when emcees hit up studio time and grinding on the regular. What do you do in the little spare time you have besides music?
I like to dance. Most of the time I’m either working on music or my dancing.

12)         Any artist you haven’t worked with yet, you would like to work with?
Pssshhht! Everyone! Definitely Emilio Rojas, Kendrick Lamar, Joey badass, Big Sean, B.O.B , TI  would be dope, Sheek Louch, Ghostface, Nas, Drake, 2 Chains, Kanye West is a must and plenty more. I’ll work with them definitely but until I do, I’ll work toward the goal.

13)         Off the topic of music but sports, you’re thoughts on the Nets move to Brooklyn!
I’m hype! I love the thought. Brooklyn is always on the map and I’m glad Jay z always sheds light on us. The Brooklyn Nets is just another way to give us some type of hope. If Jay Z didn’t do anything, he gave us entertainment and hope I mean do if from where me and my people are from that Dope.

14)         What are Grand Devante Myles goals for 2013? What other projects that you’re working on?
My biggest goal is to do as many shows as I can and get a huge buzz. Right now I’m working on my next mix tape and a tour during the summer for Pants up, the new mix tape and Plenty more! Stay tuned.

15)         Definitely a pleasure interviewing you. Any shout outs before we wrap this interview up and where can headz can reach you to get at your music?
Big shouts to Datz Hot Music, Zero Productions, Trifecta Films, Deck 52 Entertainment, Rah Mercy, HumUni, Ps Dot, Ukraine Maddox, Ludovic Calixte, Bebe Diop, O Safo and whoever I may be leaving out. God bless Ms. Lisa Siemer, my high school English Teacher, rest in paradise. She’s the reason I picked up a pen.
If you want to listen to pants up you can go to www.devantemyles.com, www.devantemyles1.bandcamp.com or www.soundcloud.com/devantemyles
STAY TUNED!!!

Posted by Intrigued Music Blog at 5:28 AM No comments: