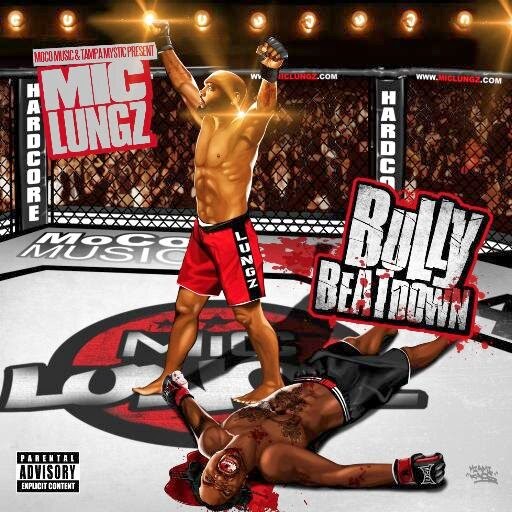 Hailing from Washington D.C. Mic Lungz has the flow that can be spotted from the golden era. He has learned the supreme essence of pain and strife which can be easily listened on his tracks. It’s nothing new that he has mastered song structure and puts his energy and soul in his music. With Bully Beatdown as his latest project, let’s see if Mic Lungz puts his lyrics to the test.
Bully Beatdown consists of sixteen cool tracks produced entirely by Judah. From a couple of listens, the musical chemistry between Mic Lungz and Judah fits well. The first track 2nd to None starts off with the nicely flute infused beat as Mic Lungz flow fluently well over the hard drum pattern. Bar 4 Bar and Beat up the Beat brings back to the essence over the dusty boom bap beats Judah provided with Mic Lungz hits with the hard lyrical cadence. Mic Lungz knows how to pick the proper beats that are compatible to his lyrical flow and the guest appearances balance well. Years in the Making puts Mic Lungz in his own zone where he straight bodied the track over the cool and calm beat with the singing hook while Adrenaline Rush has the hard drum pattern starting off with the DJ scratches. The last two tracks are straight forward with What Would You Do where Mic Lungz expresses on the struggles in life while Dedication stems from the working hard process that Mic Lungz possess. The drum pattern hits hard where Mic Lungz switches his lyrical content that fits with the bouncy beat as he spits the heartfelt chorus: Every day in my life came from working hard/that hard work and dedication/blood sweat and tears dripping from the boulevard/from that hard work and dedication/all my blessings I received yeah they be coming through/from that hard work and dedication/same thing that’s said to me is what I say to you/is from that hard work and dedication.
Bully Beatdown displays the essentials of the boom bap music and strong musical content that many people miss listening to. It’s not question that Mic Lungz has lyrics and knows how to pick the beats compatible to his lyrical cadence. This is a pretty good album that is put together with very limited guest appearances. It places Mic Lungz in a good spotlight with only Judah on the boards. Hip Hop is not dead but it’s not on the surface.
Strong Tracks: “2nd 2 None”, “Bar 4 Bar”, “Beat up the Beat”, “Passion Fruit”, “Years In the Making”, “Adrenaline Rush”, “What Would You Do”, “Dedication”
Rating: out of