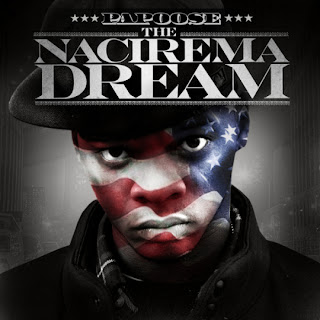 Many rappers get that buzz from the streets to the airwaves hanging with the big dogs and all of a sudden their careers fizzle. They either give up on their career or do whatever it takes to get that stardom back. Option B goes to Brooklyn’s heavy spitter Papoose as he continues on his grind and never gave up. Papoose keeps his name relevant by staying on the independent scene putting out one mixtape after another. With a stalled career signing with Jive records and making many attempts on the debut album but was pushed back and almost shelved, now it’s time to show the world on how to live “The Nacirema Dream”. Papoose’s long awaited anticipated album has finally arrived.
The Nacirema Dream is a see-saw album front start to finish with some fire head nodding tracks to while others can easily press the fast forward button.  The Dame Grease produced “Motion Picture” loses the listener with outdated kicks and snares although Pap did kick some dope rhymes. The album has its moments as Pap’s delivery is on point. The standout track is the Buckwild produced Cure featuring the soulful singer Erykah Badu where Pap kicks thought provoking rhymes about cancer; a track that let you second guess about life. Law Library Part 8 also hits home as Pap spits the truth about the criminal justice system over a well-balanced piano sample: we educated, so the cops is pissed/now they got a new plan, stop and frisk/interesting it caught my attention/cuz it’s a violation of the fourth amendment. Tracks like “Mother Ghetto” “Faith”, “Aim Shoot” and “6AM” exemplify straight Brooklyn; depicting the vivid picture of the hood filled with drugs and violence. These tracks are right on Pap’s comfort zone.
Quality of beats just made this album falter significantly as the momentum just loses steam. As mentioned “6AM” fits perfectly with Pap joins forces with Dipset’s Jim Jones and D-Block’s Jadakiss. However, the battle of the sexes track “What’s My Name” featuring Bronx’s lady Remy Ma is an awful radio friendly track that falls flat over a recognizable O-Jays sample while the posse cut “Where I Come From” is just plain terrible. DJ Premiere didn’t do justice for Pap on the 90’s influenced “Turn it Up” track; an average album filler although Pap delivery is on point while Mavado saved the inconsistent “Top of My Game” based on incompatibility of a lackluster beat and Papoose lack of energy. “Get At Me” rings bells over a nicely Ron Browz beat despite the annoying auto tune chorus.
It is hard to put out a highly anticipated album with high expectations. The beats were either outdated or not compatible with bland hooks and some wishy washy guest appearances. There are some highlight moments but this is an average album at its best. Maybe it’s the stalling of the Jive Records fall out or the anticipation debut hype but this album misfires in the shooting range. This does not exclude Pap from becoming one of the fiercest lyricists in the game. It’s simply an overrated album where bland beats and at times lack of energy just made the project tanked.
Strong Tracks: “Cure”, “Faith”, “Law Library Part 8”, “Aim Shoot”, “6AM”, “Mother Ghetto”
Average Tracks: “Motion Picture”, “Top of My Game”, “Turn It up”, “Get At Me”
Weak Tracks:  “Where I Come From”, “What’s My Name”
Rating:out of
Posted by Intrigued Music Blog at 7:49 AM No comments: Links to this post

Email ThisBlogThis!Share to TwitterShare to FacebookShare to Pinterest
Labels: Papoose 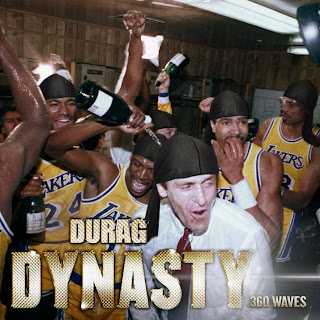 In 2013, groups are collaborating these days to bring out the best out of each other. This includes the group Du Rag Dynasty which consists of Planet Asia, Killer Ben, Tristate and veteran producer the Alchemist. There is no doubt that the Beverly Hills producer the Alchemist creates gems and Planet Asia teams up with Killer Ben and Tristate. The super group emerges and releases the new album 360 Waves.
Based on the Alchemist resume, he is mentored well by Cypress Hill’s DJ Muggs and it shows on some of the tracks. Du Rag Dynasty theme and Fish Meat featuring Prodigy of Mobb Deep exhibit the dark production with sharp lyrics that fit the bill: murder machine rifle/promethazine leaving you leaning like Eiffel . The production has that mixture of a seventies inspired feel good beat with a contemporary bounce to it. Although the production on this album is very stellar, the lyrics on some tracks can be monotonous at times. The delivery is consistent on some tracks but the guest appearances outdo the artists. Big Twin Gambino does damage on “Bigger U Are The Harder They Falll” while Phil the Agony stepped his game up on “Trailer Mix”: my flow water like the aqueduct/see a lot of rappers coming up but half of them suck/stretching weed like laffy taffy/I’m like BIG from ashy to classy. Imam Thug amps it on “Goon Call” but the group sounds average while the soulful “Tender Greens” stands out on a production level with a nicely1960 sample but the lyrics got lost with no compatible balance; the lyrics would fit better on a little faster up-tempo beat and the beat would fit better with some back in the day or a loss of a family member lyrics more suitable for Queensbridge rappers like Capone n Noreaga, Cormega, Nas or Mobb Deep. A few tracks do stand out lyrically such as “360 Waves” Tristate did his thing: Egyptian cloth, solid gold cross/tabernacle talk, low and behold when shells bark/leave you bitten, snoopin’ in the garden of the hidden/false prophets plagiarize lines of my written. The album gets to the ending with “Luxury Whips” when the trio raps on their braggadicous rhyming flair on their whip game.
This is still a standout base on gritty lyrical chemistry and awesome production. It’s a no frill get into your face album, nothing more or less. At times, the production outweighs the lyrics as Planet Asia is an accomplished MC with slick wordplay but unseasoned emcees Tristate and Killer Ben have the delivery but don’t have too much of the charisma. This would be a great album if they stayed with darker production tracks to complement their delivery like Du Rag Dynasty and Fish Meat. Although not a thought provoking album and struggle at times with compatibility, sometimes the old statement still rings true; if it ain’t broke, don’t fix it!
Strong Tracks: “Du Rag Dynasty Theme”, “Fish Meat”, “Bigger U Are The Harder They Fall”, “Trailer Mix”, “Luxury Whips”
Average Tracks: “Goon Call”, “Yasir Arafat”, “Tender Greens”
Weak Tracks:  “Shooters”
Rating: out of
Posted by Intrigued Music Blog at 6:34 AM No comments: Links to this post