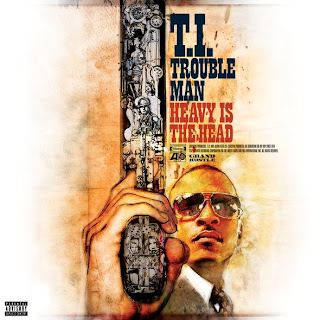 It has been a year since his release from prison and T.I. has changed significantly to stay out of trouble. With a reality TV show already in the works, Clifford “T.I.” Harris wastes no time coming out with the latest album Trouble Man: Heavy is the Head an album that places him back in his comfort zone.
This album compliments his style as T.I. does not hold any punches and put his life on his album without sounding defensive unlike his last album. T.I. starts off aggressively with the open intro “Trouble Man” as the sample insisted Marvin Gaye beats puts him in his zone. DJ Toomp infused T.I. with the trap music beat that makes him a household name in “Trap Back Jumping”. One of the best tracks is the Andre 3000 assisted “Sorry” where he catches wreck. Toronto’s secret weapon T-Minus blessed T.I. with “Go Get It” and laced a cross over, pop influenced beat on “Guns and Roses” featuring Pink. The T.I./Pink collab may seem out of place on paper but this track it works well.
T.I. does keep his high up tempo energy but some tracks failed miserably, which affected the consistency of the album. The unfocused Neptunes laced “Hello” featuring Cee Lo Green is off the radar while “Ball” featuring Lil Wayne is a average track, nothing special to get off your seat. “Cruising” drowns the listener and didn’t place that pop friendly impact like Live your life featuring Rihanna; it’s simply not a good song.
Trouble Man is not a flawless total package album but improves significantly over the underwhelming last attempt No Mercy. Although doesn’t have the hunger like his debut opus Urban Legend, Clifford Harris still maintains his self-proclaimed king of the south crown to the fullest. Trouble Man is a balance of the cross over attempting Paper Trail while still maintaining his Trap influenced composure in Trap Music. If you’re not into partying and the good life, this album may turn you off. Although he claimed to be the trouble man, T.I. didn’t apologize for his mistakes; which can revitalize his status.
Strong Tracks: “Trouble Man”, “Trap Back Jumping”, “Sorry”
Weak Tracks:  “Hello”, “Ball”, “Hallelujah”
Rating:out of
Posted by Intrigued Music Blog at 7:38 AM No comments: 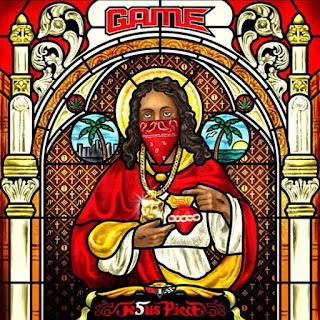 Game is no stranger into controversy. Although he put the west back on the map, revelations constantly followed him. Despite news controversy and numerous music beef, The Game still puts out good music and his previous albums proved that. Now the Game comes out with his new album “Jesus Piece” which includes a provoking cover of Jesus sporting the red rag over his face.
This album starts off with some gems and the production does compliment the Game’s delivery. “Scared Now” sparks with hard gritty production from Black Metaphor which shows Game delivery with Meek Mill adding the flavor to the song. Game speaks his mind and embraces his love for the women in his life on “Pray” while “See No Evil” he raps about his spiritual growth. The best track is “Can’t Get Right” featuring west coast secret weapon producer K. Roosevelt as Game made his confessions about avoiding the street life and keeps his mentor Dr. Dre in his mind. Game made his confessions on this track. “Felt he shitted on me for Kendrick/Recorded diss records/And Kendrick my nigga, put him on his first mixtape/I popped champagne when I heard he was with Dre/And, I’m telling y’all this true story ’cause I’m real/Dre first time hearing bout it, wonder how he feel,”
Although the beats fit well, they can be a little inconsistent at times. “Ali Bomaye” featuring 2Chainz and Rick Ross is too lengthy which pulled off in the 90’s but not with today’s listeners which may bore them while “Church” is a failed miserable attempt to go dirty south with King Chip didn’t add any ump to it. The title track does not add any hard punches despite Common owning the track. Game just didn’t pull his potential and Kanye West adds very little impact to the song. In addition, there are too much guest appearances on this album which is okay in normal standards. The downside to that is there is no growth for the artist to shine by himself. Only two solo tracks on the album distract the artist and dwindles the album.
This album is not Game’s strongest album which does not compare with his previous efforts. It’s not a disappointed album but inconsistency and over saturation of guest appearances played a major part. Although the Game tried to diversify his style while maintaining his image, the question is did he successfully made the transition well?
Strong Tracks: “See No Evil”, “Pray”, “Can’t Get Right”
Weak Tracks:  “Ali Bomaye”, “Church”, “Jesus Piece”
Rating:out of

Posted by Intrigued Music Blog at 5:11 AM No comments: