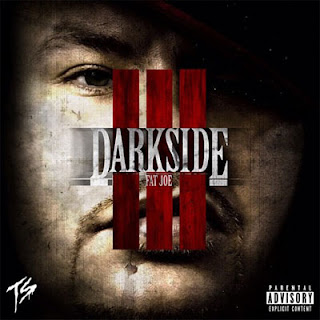 South Bronx’s Fat Joe has been relaxing for a hot minute. Due to his legal actions, Fat Joe has been taking it easy. The Terror Squad leader holds it down after dropping one album after another; he made a mark in hip hop history.  Fat Joe also keeps his name on the streets from the Darkside mixtape series. With The Darkside 3 mixtape finally dropped, has Fat Joe still had what it takes to body a track? Can he take it to the next level?
Throughout the album, it has the gutter beats that the fans looking for. The “Darkside (Intro)” has a soulful influence as Fat Joe’s delivery has not lost its touch; he flows on cue over Streetrunner’s production. However, the auto-tune Dre chorus slightly dwindle the consistency but didn’t oversaturated the track. It’s a good way to start off the track but the standout track. This does not mean the mixtape is a disappointment, not by a long shot. “Madison Squares” produced by Young Sap and Cool and Dre brings the excitement back continuing the soulful beats with the highly energized drum patterns which Fat Joe flows nicely as he raps about the cars, women and the fast life. Streetrunner brings it again with “MGM” has the production brings out the high energy from Fat Joe as he rhymes about the fast life. Now this is the track I’m looking for with the fire piano production with added bass and kicks it to Fat Joe spits heavy: suicide is a suicide/picture Justin Timberland no suit and ties. 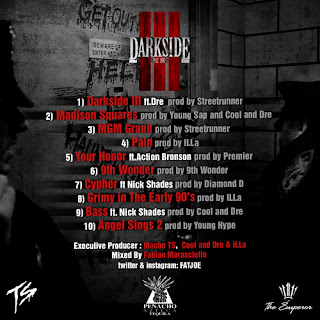 As the mixtape continues on, producer Illa gives the added ummph to the mixtape. Tracks like “Pain” and “ Grimey in the Early 90’s” goes in bringing out the old school Fat Joe as he spits about growing up in the streets in “Pain” and spitting about his come up in the Golden Era hip hop days on “Grimey in the Early 90’s”; the grimey cinematic production puts you in a trance of a black and white video sorta like “The Shit is Real (remix” video. DJ Premiere came through as well with the old school boom bap drums and the grimey guitar looped production is hard on the Fat Joe/Action Bronson tag team track “Your Honor” as Joe spits about his prison sentence to Jay/Beyoncee’s baby Blue Ivy. He also gives a great description growing up in public housing on “9th wonder” rhyming over a mellow soulful sample and hard hitting boom bap drums laced by producer 9th wonder.  I was waiting for this to happen but the BX creation of a Fat Joe lyrical content over a Diamond D beat always equal success. This worked very well with the assist of Nick Shades on “The Cypher”. Fat Joe came off strong but Nick Shades bodied the track bringing back that 90’s energy into the track. It’s the same thing with “Bass” when Nick Shades came correct surpassing Joe. The mixtape ends with “Angels Sing” which wraps it up in a nutshell bringing out the other side from Joe as he brings it to the critics over a high energy beat produced by Young Hype. The beat is fire but Fat Joe pace of delivery on the second verse kind of lost the listener.
If you are looking for lyrical cadence and flow, this mixtape is definitely for you. Don’t expect lyrics that will stick in you like soul food from Joe but you will enjoy his storytelling lyrics throughout the mixtape. Fat Joe has not lost his step at all. The production on the album is top notch with its diversity from boom bap instrumentals to more contemporary beats. Production wise, this album is a gem. Lyrically, Fat Joe comes correct and still holds South BX down but there were some minor mishaps. The Dre auto-tune chorus, a few simplistic lyrics from Joe on some of the songs and Nick Shades over shining Joe throw the mixtape off the loop a bit but didn’t drain the consistency. This has not changed the overall scope of the project. Although a few strong heavy hitting songs are short, this is definitely a popping joint and is worth listening to. This is good enough to wait for his studio album in the future.
Strong Tracks: “Madison Squares”, “Pain”, “Your Honor”, “MGM”, “9th Wonder”, “Grimey in the Early 90’s”, “Bass”
Rating:out of

Download Mixtape | Free Mixtapes Powered by DatPiff.com
Posted by Intrigued Music Blog at 6:39 AM No comments: Links to this post